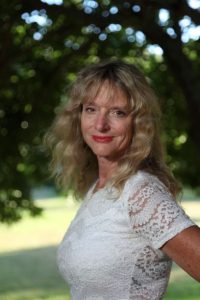 In 1975, when I was twenty-two, working as a journalist for a feminist newspaper, my editor came in and said, “There’s a witch on trial for fortune-telling.” My hand shot up; “I’ll take that story!” And so my life of growing up in a scientific household where all religion was held in contempt, took a dramatic swerve.

I’m still a highly rational person—and also a playful one who will put on a headdress of flowers and dance around a maypole. What exactly is it about the world of magic and ritual enchants me so? The stories. The mythic ritual that resonates down to my bones, the waking dreams of the trance state.  For by entering the world of myth, my own small story is writ large, becomes resonant with the ancient temples, with an ancient template.

All of us have our archetypal story, our myth. We may have several, intertwining throughout our lifetime like roses of different colors, and we likely have one that dominates the rest. Since mythic consciousness, as Jung said, pervades us all, our personal myth will be a story that has been told before, with many different shadings.

When I entered into the world of magic, on a Wiccan path, my unconscious began guiding me, spooling out Ariadne’s silver yarn to guide me into the labyrinth. At my first big Pagan gathering, Summer Solstice of 1975, I found that it was traditional to take a ‘magical’ name. The name Cerridwen kept echoing in my mind. I knew she was a Celtic Goddess, but no more than that. Eagerly, I sought out my elders, asking who Cerridwen was.  “Oh,” they replied, “she’s a pig Goddess.”

I felt a trifle deflated, but then I thought, well, as a passionate Scorpio, perhaps I could get behind beneficial greed. When I got home from several days of naked frolic I started researching and discovered that while Cerridwen had several totem animals—the wolf, the snake and the sow—her true meaning was as the keeper of the cauldron of inspiration from which all storytellers must drink. She is also the Goddess of rebirth who knows that one life is but a chapter in the soul’s long story. So I took a sip from her cauldron, and everything changed.

Since Shakespeare wrote the lines, “Bubble, bubble, toil and trouble, fire burn and cauldron bubble,” in his play ‘Macbeth’, our culture has shied away from the image of Witches cackling over a seething cauldron as an icon of unspeakable evil and horror.

But a cauldron is only a big soup pot, something every family in old Europe cherished since the beginning of the Bronze Age.  Often it was their most valued possession and the heart of their home. Because of it, whatever they gathered or raised could be thrown together with a little water, and a nourishing soup or stew would emerge.

The cauldron has been a symbol for magic because it is an earthy metaphor for transformation—throw a bunch of disparate elements together and they somehow become more than the sum of their parts.

When used for medicine, the cauldron could combine herbs into a potent, healing tea or salve.

So our ancestors viewed the cauldron as a magical implement, the cauldron of changes.  In Celtic myth, the Cauldron of Cerridwen holds the inspiration from which all artists and poets must drink to be inspired: it also carries the promise of transformation that transcends death: the mystery of rebirth.

Stories simmer in our minds, often for years.  They can be nourishing and delicious as soup; they can be as potent as medicine.  The Witch is one who stands outside of the culture, in a little house in the woods, with her herbs, her observations, her stories and her wisdom.  She brews soups and spells, potions and cures.

The Goddess Cerridwen has one shining imperative; tell your story.

So how could I resist her call to tell mine? 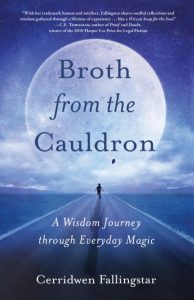 My core story echoes the myth of the Egyptian Goddess Isis and her husband Osirus. Osirus disappears; Isis intuits that his envious brother, Set, has killed him, torn him to pieces and scattered the remains.  She searches and searches and finds pieces of her beloved. His writing hand in a stand of papyrus. A kneecap buried in the sand near the paws of the Sphinx. Finally, she has gathered and reassembled all his parts. Only his penis is still missing, swallowed by a crocodile. She fashions a cock out of gold and attaches it to Osirus’ body. Then she breathes him back to life.

The way we heal a dismembered world is to re-member it.  I have used trance work, hypnosis, to activate far memory, to conjure lives I have lived hundreds of years ago. My past-life novels, The Heart of the Fire, set in 16th century Scotland, and the White as Bone, Red as Blood series set in 12th century Japan, are important not so much for the adventures of my own character in those times, but for the memories they invoke in the reader of what it was like to dwell in a magical world, where miracle is an accepted part of everyday life.

Memoir is, as its title suggests, memory. My current life as a priestess is the journey of Isis, piecing together a vanished way of life, reconstituting a pagan world-view in which the earth is alive and aware, in which all beings are valued kin.  My new book, Broth from the Cauldron; A Wisdom Journey through Everyday Magic offers teaching stories from my journey through life, and from my forty years as a shamanic teacher and Wiccan priestess. We all have a right to live meaningfully, and deeply. I hope a little ‘broth from the cauldron’ will nourish you on your saga.

Cerridwen Fallingstar is a shamanic Witch who has taught classes in magic and ritual for over thirty years. She gives lectures tying together psychology, spirituality, history, contemporary issues, and politics in an entertaining, enlightening, and humorous format. She is the author of the new release Broth from the Cauldron: A Wisdom Journey Through Everyday Magic as well as three historical novels based on her past lives: The Heart of the Fire, White as Bone, Red as Blood: The Fox Sorceress, and White as Bone, Red as Blood: The Storm God. She lives in Marin County, California.